Blog - Day to day mumblings...
Traceroute - Am I lost?

This week for Understanding Networks we needed to run a serious of traceroutes from various sources (local terminal, raspi, phone hotspot etc) and analyze the patterns we found.

The sites I decided to traceroute were sites I visit often but also some further away to try to produce more interesting routes.

Analysis Synopsis
The internet is mysterious and this process made me even more in awe that it works, mostly smoothly.

Oddly the majority of my traceroutes ended in a long line of *** hops. Which made full analysis some what difficult. See full traceroute text file here.

I used a number of tools

All of which are linked below.

As mentioned above the majority of my traceroutes ended in *** or no response hops. Only a few fully completed.

I thought it was odd that I couldn’t get a completed traceroute to my site or to nyu.edu. So I tried to use the nyu vpn to see if it was any different. The results were the same and actually got to no response hops much quicker from within the nyu vpn.

I also used arin.net to get more details regarding the IPs. I found not surprisingly a number of spectrum and google IPs in most of my routes.

Analysis Rabbit Hole
I did find some fun tools along the way.

I found this python script that will analyze a traceroute and return json data that is a little more readable than the typical traceroute results. The –ip= arg works with both IP or domain name.

It shows you host, longitude, latitude, rtt (round trip time), hop_num, and the hop IP.

I kinda went down a rabbit hole, I know again…, after this and with the help of this thread wrote my own little python script to parse out only the long / lat values so I could plot them on a map with this plotter.

I made it so I could pass input and output args, but I am mostly using just the printed values in terminal. I guess I could pipe / redirecet “>” these into a file instead or adjust the script to just write those instead of another json file. Once I had all my traceroutes I wanted to plot, I did end up appending “»” to a single longlat.txt file I used for plotting.

WIth all that sorted out I also redirected the traceroute.py results to my json files, with a simple shellscript, to use with my parse script.

I Tried going into the inspector and making some adjustments to make the map look a bit better.

That didn’t quite give me the feeling I wanted so I also tried this map maker tool. That tool of course wanted them in the reverse order lat, long but also allowed me to plot them on google maps. And custom color the dropped pins. So I of course made another python script to reverse the order and add a random hex color code.

I guess I could make this one script and just change the order and add color with args. I’ll probably do that at some point.

But after further analysis, I realize that this data seemed a bit off. There were a LARGE number of of these values -97.822,37.751, which lo and behold is Cherry Reservoir. Looking on the traceroute.py github repo there were no issues about this but the IP ranges associated didn’t show up in my actual cmd line traceroutes. There were also a number of IPs with that longitude and latitude so they must just not have specific geo data associated with them. However looking a few of them up on whatismyipaddress.com gives me a more realistic geo location. So who knows?

So while fun to use and made me mess around with python a bit more. I don’t think the data 100% reliable.

I also used the traceroute mapper tool we looked at in class. It was giving me some odd results and I think all the blanked out hops weren’t helping. I also added it to my bash.profile so I could just run it cmd line.

Here are some of the maps it produced:

thrashermagazine.com This one seemed somewhat correct and the actual traceroute did return almost full results, but the mapper appeared like it just started on the #4 hop? 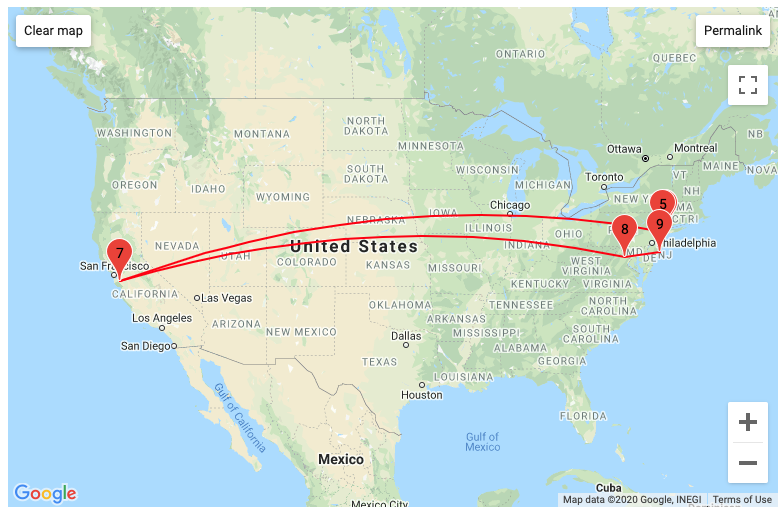 bbc.co.uk This one was very odd. Just plotted one point smack dab in the middle of the US. Traceroute cmd actually made it to hop #6 (a charter exchange) before going silent in the *** hops. If I took the traceroute from the terminal and paste it into traacroute-mapper instead of running the mapper cmdline I get a little better results. 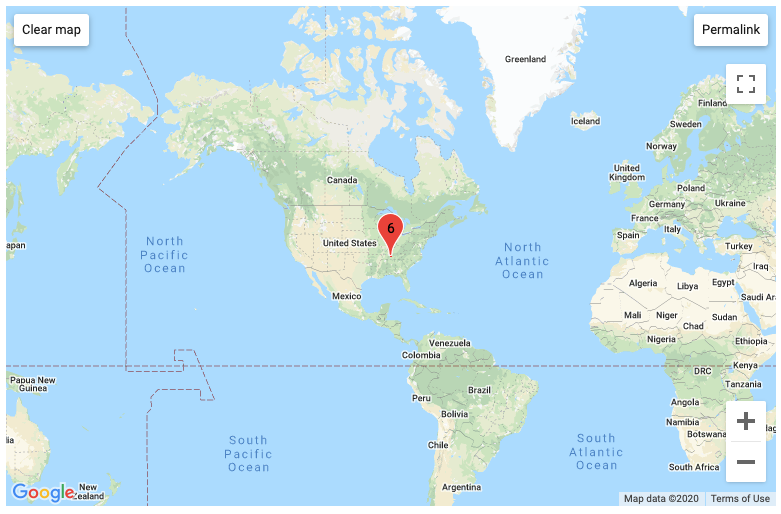 nyu.edu Again oddness in what was plotted.

kakao.com This one was mostly for fun. I just wanted a longer geographic distance to map. 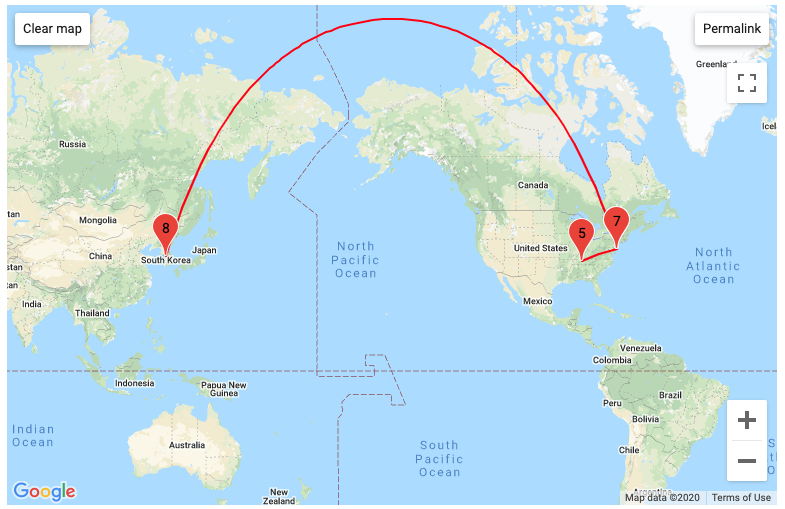 Final Thoughts
The internet is still mysterious and you get what you paid for. After this process I am not sure I know more or less about where I am in the interwebs. Which is why I titled this post - “Am I lost.”