Worked on fab, ALOT of coding, and some music.

One of my todos for the week was to get all 8 capacitive inputs going. Which meant redoing my can.

I fab’d another can (I had extra), taking cue from Noah, wrapping the whole can in the insulation foam and applying the copper tape leaving the backing on and using a different double sided tape.

This technique gives us a much nicer looking capacitive sensors. 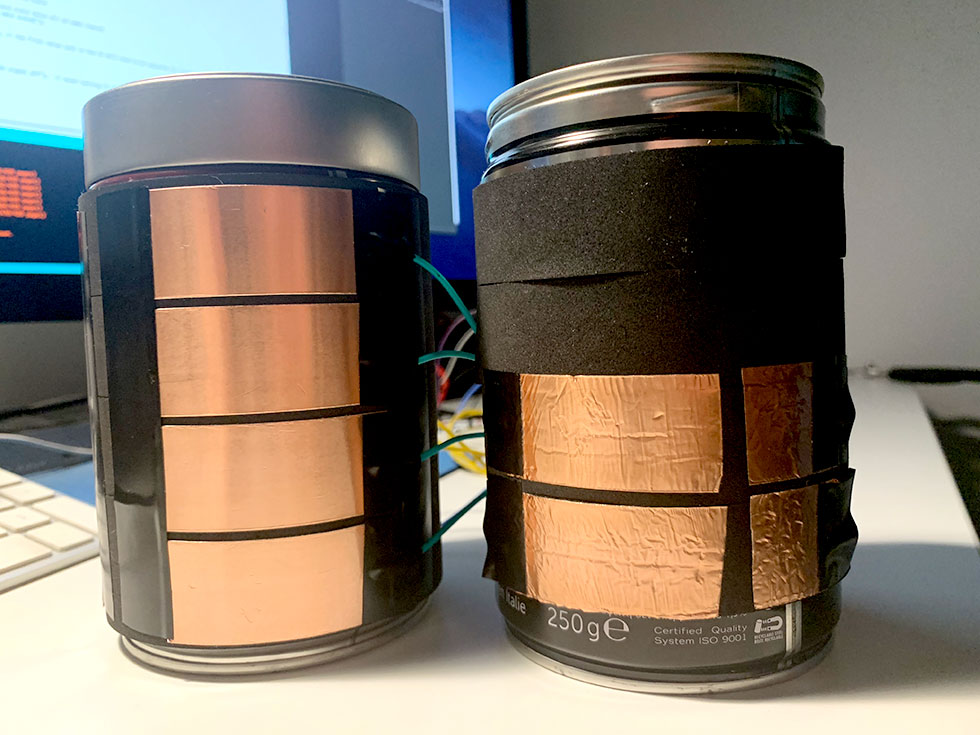 I did make one mistake and made my slide sensors too long. With them too long I was unable to comfortably hold the can without touching both sets of sensors.

I had to go in for on the can surgery… Luckily it all worked out without a hitch. I was able to trim down the slide sensors as if nothing ever happened.

Code The majority of the coding was spent building out the different modes we wanted.

Mode selection will be controlled by a rotary encoder on the top of the can.

Also improved the calibration functions to take a reading of just the can at beginning for use as thresholds throughout the program.

Additionally built out functionality to turn all capacitive inputs into scale buttons. This hopefully will allow us to play something that sounds more like music (still a work in progress.)

Music
As mentioned above it’s still a work in progress. Still trying to find sounds and figure out how to do exactly what we want in Logic.

Here is a recent attempt at making some “music” 🤷‍♂️

Questions
1) What is music?(jk)
2) What is the best way to make holes in the can, drill?
3) Anybody have experience using the key assignment feature in Logic?

OLD To Do
1) Figure out what MIDI cmd to use to turn off all sounds on a specific channel
2) Figure out what makes the quantum bass software synth loop, so we can control it This is happing based on combination of ADSR settings
3) Figure out if we can do trace-route Doing on computer with Nodejs server
4) Continue working on capacitive inputs Still need to test lid sensor and new copper material
5) Figure out how to adjust the various MIDI control values (ADSR)
6) Figure out what we’re actually going to play
7) Decide what exactly to send over UDP
8) Figure out how we hear each others music We’re going to send each other various channels
9) Finalize components mostly done here
10) Fab
11) Make music