The MIDI_CAN is a networked, multimode, instrument / MIDI controller.

Created with Noah Kernis, The MIDI_CAN is designed to be used with one or more musicians / devices. The MIDI_CAN can be played by itself or collaboratively over the internet.

With the pandemic and the new socially distant world we find ourselves in, we are now more separated than ever. We wanted to make something to connect us, even though we are miles apart.

Facing mandatory stay at home orders what can we do to continue our collaborative nature? How can we still connect even though we can’t physically?

Music has that power and we wanted to make that a part of this project.

Using Arduino, NodeJS, MIDI, UDP, and your DAW of choice, the MIDI_CAN connects us in these new strange times.

With an Arduino Nano 33 IoT, an 8 sensor capacitive touch array and a rotary encoder, the MIDI_CAN allows for multiple input modes.

Sending MIDI signals to your DAW, it is also broadcasting and listening for incoming MIDI commands over UDP. A locally hosted Node server sends and receives UDP signals over the internet to play with others. Predetermined network configuration allows for easy transmission of signals across the web.

Customizable modes and channel setup allow us to tailor to the device to our own preferences.

With limited resources the MIDI_CAN was built with kitchen fabrication at its core. Using an Illy’s coffee can as the enclosure, it’s both robust and ergonomic. Wrapped in rubber foam to provide capacitance insulation, and stuffed with a microcontroller and circuit, the MIDI_CAN has a very balanced feel in hand.

MODES
1) Explore Mode: allows you to play individually configured channels in the DAW. The 4 capacitive button inputs are used to play notes controlled by the encoder. The 4 capacitive slides allow for a range of notes to be played.

6) Slides as slides or notes: The four slide inputs can be set to play a range of notes or a set not determined by the encoder values.

7) Pot mode: switches encoder to act as a potentiometer to scroll through audible not ranges. For use with Explore mode.

11) Calibration Mode: on startup, the can goes through a calibration process to set min and max capacitance for all sensors as well as the can.

Fabrication Process
With limited resource we pushed through with kitchen fabrication. Inspired by my last purchase of coffee beans, we decided to use an Illy’s coffee cans as our enclosure.

Wrapping the can in foam tape allowed for enough insulation for the capacitance from just holding the can not to trigger the sensors erratically. To dial things in even further we set can capacitance and buffer thresholds during the calibration process.

We used capacitive copper tape for our custom sensors and a rotary encoder out of the top of the can for mode selection, channel selection, and adjusting note values in “potentiometer” mode.

The usb power cable comes out of the bottom of the can.

After a few rounds of prototype fabrication it was time to do the full fabrication, which essentially meant destroying to already working device. In prototyping, all wires were attached to the sensors on the outside of the can with electrical tape. We wanted everything to be internally wired. This meant taking everything apart… which was extremely nerve racking.

Cutting holes in the can and soldering to the copper were especially stressful. It was all working previously, fingers crossed it will work again.

I used a combination of small nails and drill bits to make my holes. Testing on a back up can first, I found that drilling plus having additional rubber foam on the inside of the can produced the least blow out.

To smooth things out in the end I used a Dremel to sand down the rough edges. 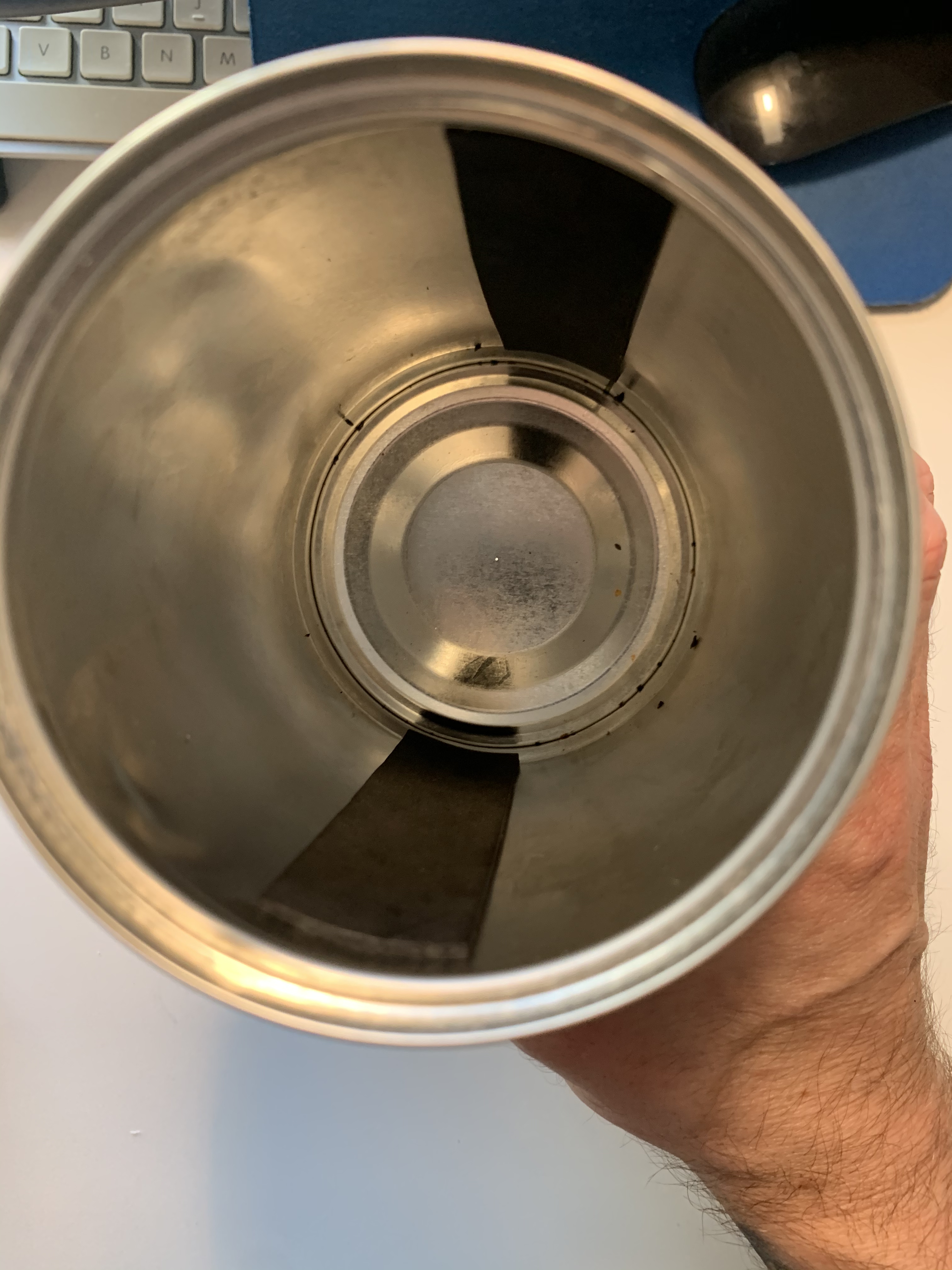 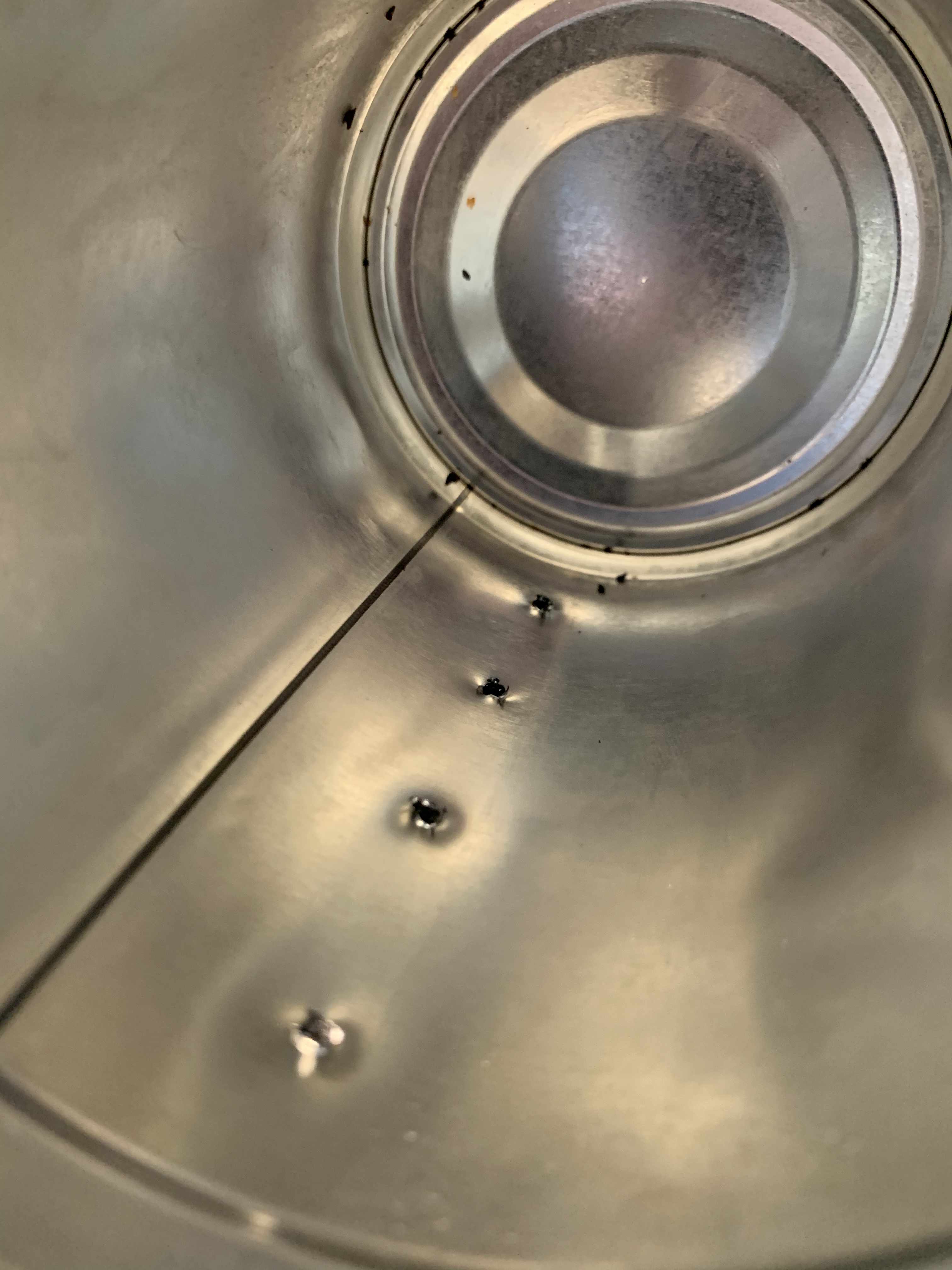 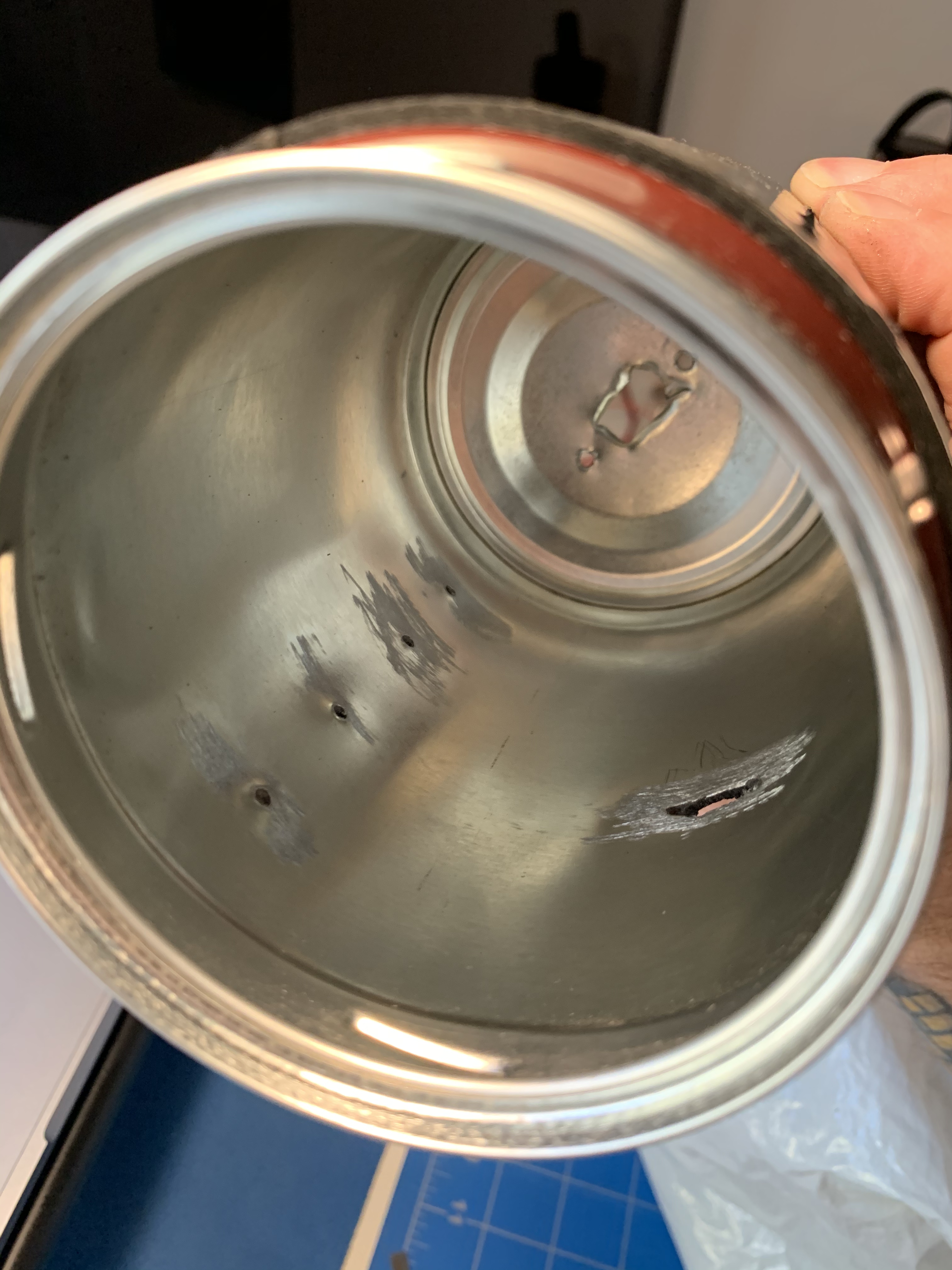 Fabrication - luckily she came back to life after deconstruction

Electronics, Code, and Schematics
Building our own capacitive sensors was a fun process. Tt took some time to understand the send and receive schematic but this video helped clear things up.

We still plan to figure out how to make the sensors work linearly as well as adding some multi-touch functionality.

Multi-touch functionality would make for much easier music play, by limiting the need to use the rotary encoder.

We also faced some responsiveness issues with the sensors which seemed to be exaggerated depending on what instruments we had set up in the DAW. As we continue to work on this we’re going to try to resolve that as well.

The rotary encoder gave us another input and allowed for mode selection and acts as a potentiometer in explore mode.

As we work on this further we hope to add functionality to engage “as pot mode” automatically when in explore mode and with a capacitive reading over a certain threshold.

We used a number of libraries to put this whole thing together.

All code for the Arduino and the Node servers can be found here on GitHub.

The MIDI_CAN use two or more local network NodeJS servers to send and receive data across the internet. Currently using UDP we make look into transitioning to web sockets in the future.

We started with UDP, as our initial concept was to do it all from the Arduino but we eventually decided to off load some computation.

In our tests we were running the servers on our laptops but they could easily be set up to run on a Raspberry Pi.

A lot of time was spent refining the cap sensor calibration code. Writing code in a more succinct way, using for loops and arrays, helped reduce the amount of lines needed.

One component we didn’t complete was programming the OLED to display calibration data and mode and channel data. This will be great to add but was not needed for final presentation. The serial monitor worked just fine.

Many of our working working / development sketches can be found in the r_and_d directory on GitHub. 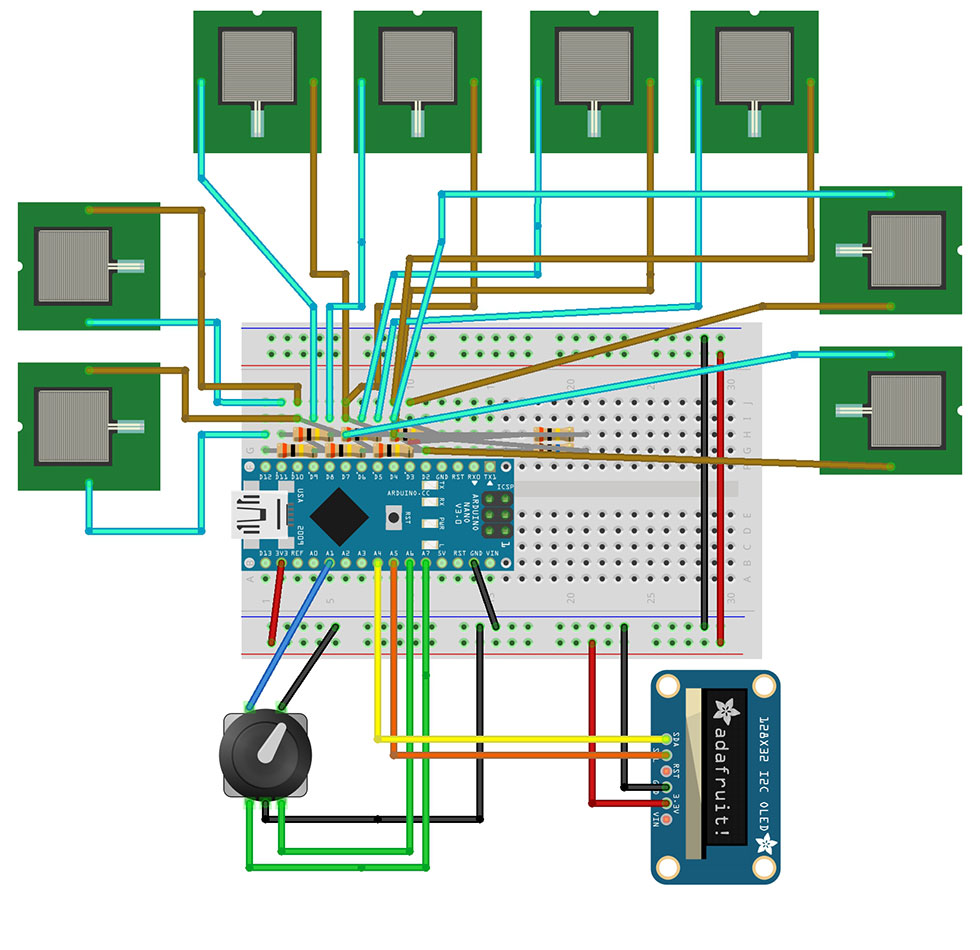 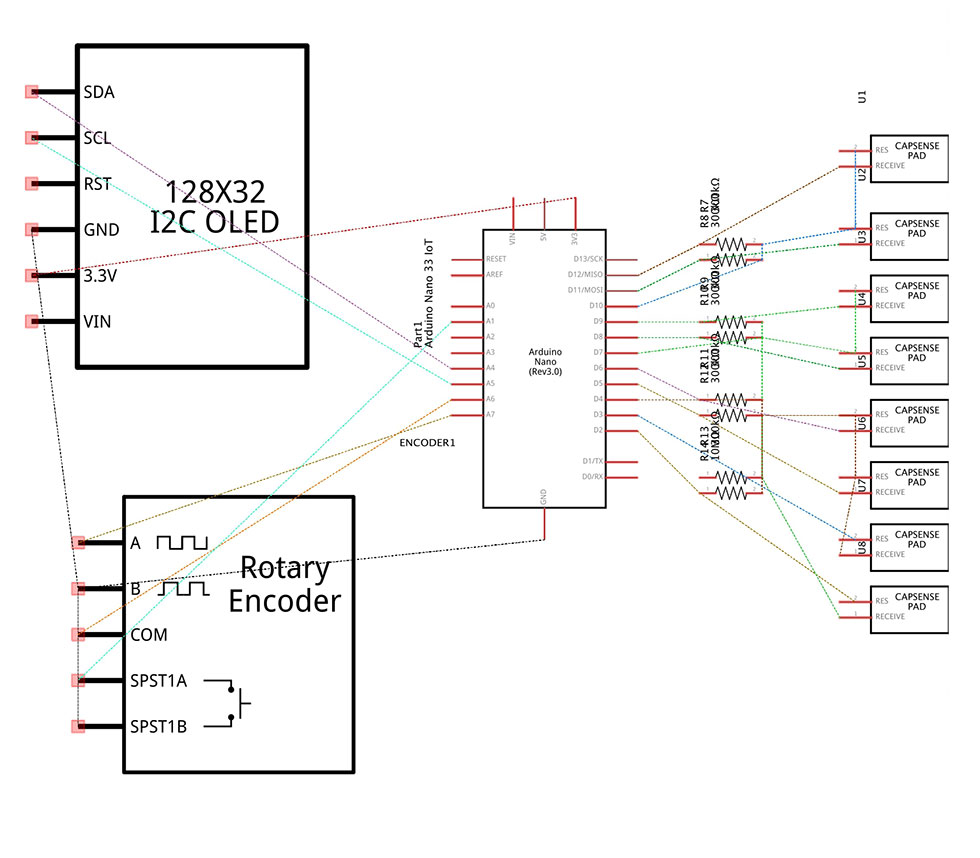 Network
Passing MIDI via UDP over the internet was added an additional layer to this project.

Noah did a great job getting us connected and set up this fun web config API. Allowing us to confirm connecting settings and adjust capacitance buffer etc. 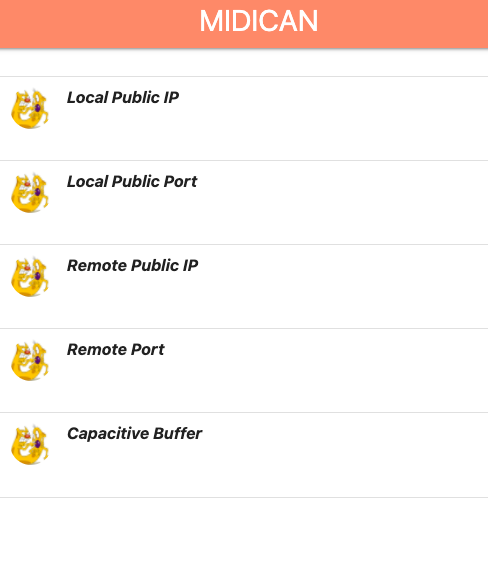 We plan to add further functionality to the API.

We also did not get to tying in the network data to alter each individual user’s music environment.

This was a fundamental part of the original concept and stil on the todo list as we continue working on The MIDI CAN.

Music
Having some minor musical background (I can play a thing or three on a guitar) exploring DAWs was a whole new thing for me. Logic is an emense program and we both spent a lot of time exploring what options we had to do what we wanted.

Only scratching the surface of what is possible, I think we got to a decent place of being able to make somethings that sound like music.

Working with a combination of included and found sample tracks as well as software instruments from Logic that are set with infinte sustains we were able to create some interesting compositions.

Still on the todo list is a way to record/sample some of those progressions and loop them to continue to build on top of them.

I think adding that feature will really help the MIDI_CAN shine as an MIDI instrument.

I think another break through feature was adding the ability to play chords. Currently configured to play in the key of C major with C, F, G, & Am chords, adding chords produced a really nice full sound.

Here are a few recordings of us playing around with sound.

Summary
Overall we’re very please with how this project turned out. Especially given the current circumstances. Working with Noah was great and to no surprise to either of us we both brought value input and feedback to all aspects of this project.

We both want to continue to work on this and iterate both on the design and functionality.

We’re also working on a submission for the Network Music Festival.

Things still on the list:
1) Finish OLED
2) Network data modifying music environment
3) Glitchy music / volume on off mode
4) Sampler / looper mode
5) Figure out how to have both linear & nonlinear slide sensors
6) Improve responsiveness of capacitive sensors
6) Add auto “encoder as pot” in explore mode when a cap reading is over a threshold
7) Remove channel select mode and just have it be in each mode like chords & broadcast
8) Clean up UDP serial monitor prints to be able to better see modes etc
9) Customize modes, channels and placement from API