A few of my classes have referenced the work by sound sculpture artist Zimoun. Each one beautiful and simple in its own way. I really like the use of simple materials, motors and how the movement of the materials create sound.

Below are a few Zimoun pieces that I really resonate with.

I attempted to do a Zimoun inspired piece for Intro2Fab but it was somewhat of a failure. For a reminder of that failure go here.

So I would like to have a second go at it.

I also want to have it be a piece on climate change.

I knew Joey had a wealth of knowledge on climate change and data associated with it, so I picked his brain for a bit.

He showed me the Representative Concentration Pathway or RCP Wikipedia page.

The RCP’s are representative greenhouse gas trajectories adopted by the IPCC in 2014. It basically describes best and worst case scenerios if we (humans) take action on climate change or do nothing.

These pathways can then be used to map out projections on the potential global warming and sea level rise we may see over the next 100 years.

My idea is to take these projections and map both the best case and worst case scenerios overtime.

Then take those data sets and use them to control a sound sculpture inspired by Zimoun’s work.

There would potentially be metal rods / tubes attached to dc motors and as they spin they would create a sound. Also depending on the speed of the motor(s) they would sometimes run into each other creating more sound.

The best case scenario would produce a more tranquille movement and sound.

There will be some sort of user interaction to switch between the two modes. Either button / slider type interface or simply a sensor that changes the mode based on the user’s distance to the sculpture.

I’m not sure on the exact scale or orientation of the sculpture itself, but below are a few preliminary sketches. 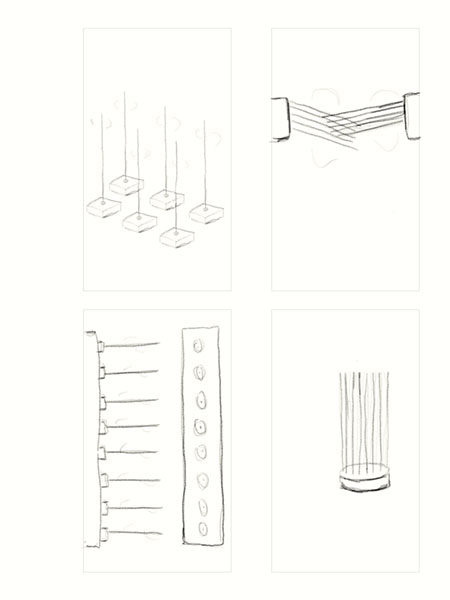