Blog - Day to day mumblings...
Back Side Of The Moon

Back Side Of The Moon

Canvas of final work at bottom

While I do have a little bit of web / js experience I HAVE NEVER DONE A DRAWING WITH IT!!!

This was cool and fun.

I really liked the approach from the assigned reading. I thought starting with simple tangible tasks, like drawing shapes etc first, to keep new users engaged was a cool approach.

Inspiration:
My son is in to rocket ships, and really likes this rocket from a page in his Los Angeles Is… book.

So I decided to draw one. I added the alien peeking out to make it a bit more fun. 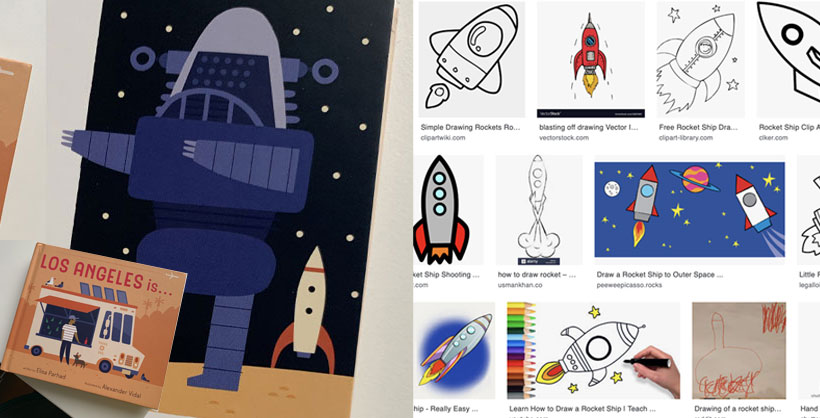 I also took a quick scroll through google images just to see if there was anything else I wanted in my rocket drawing. 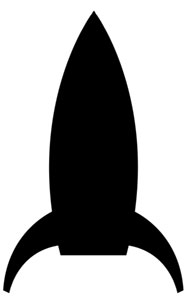 It changed a bit along there way. But my original concept held true for the most part.

Since I was doing a bit more complicated shape than basic shapes I reviewed the vertex() function and it seemed to do what I would need. At least I thought so…

I also had the bright idea that since I already had the points from my vector drawing, maybe there was a way I could export the coordinates. Low and behold there was. I found this sweet super simple to use Illustrator Point Exporter by elcontraption on Github.

It gave me exactly what I was hoping and with a little json clean up I had my point coordinates.

Unfortunately, this is where my first problem started…

I had the points but I wasn’t sure which point was which or which direction they were going in. And on top of that I lost all my curves.

While I like how much this looks like a Viper from BattleStar Galactica, it was not the look I was going for.

I tried to get my curves back back using the curveVertex() function, but not knowing which point was which made that difficult if not impossible.

I tried breaking up the shapes into individual parts but I still couldn’t get the function to work the way I wanted.

I resorted to layering shapes and eventually adding more vertex() points to my shapes to achieve a design similar to what I originally envisioned.

I also had some issues coloring the rocket body. I wanted to add a bit of gradient / contour to it, but I could not get lerpColor() to work correctly. I ended up adding more layered shapes with various alpha opacities.

Next was the moon. Which was pretty straight forward. I used one large ellipse and then a few more ellipses layered to create the craters.

After the moon, I wanted to make the sky more interesting so I added some small ellipses for stars. I had to use small ellispes since I had set noStroke() in the setup func.

Once I added a few I realized I really wanted them to shimmer. Familiar with IF statements I figured I could get that working. After some trial and error with handling the perpetual draw() loop. I was able to get them to shimmer pretty good. I also used =RANDBETWEEN in Excel to generate random star coordinates.

Overall I’m pleased with the shimmer affect. But hope I don’t get in trouble for using variables :).

However, this is one place in my code where it felt clunky and that I could have done this in a much more succinct way. Ideally a function and object to randomize things.

To wrap up the image I added a little green alien. He is made of basic shapes ellipses, quads, rects, and triangles. He’s looking wide eyed at the rocket that has just invaded the backside of his moon.

A few additional things I really wanted to do were:

I really enjoyed this project and look forward to whats next. Hoping to learn how to control the shapes a bit more so I can replicate some of my more complicated dravwings in p5.