My final project for Energy class is Solarbloom - a solar-powered kinetic sculpture.

Inspired by the movement of Japanese paper fans, my previous kinetic flower work, and my mom’s unique glass art, I wanted to create another kinetic sculpture but with a different mechanism.

Mechanism
That different mechanism ended up being one of the most challenging parts of the project.

As soon as I decided on basing the movement on a spin to open, I thought, can I even figure this out?

Many days thinking and researching other mechanisms; I settled on what I call the sequenced tab. I’m sure this has been done before, but I did not find an example precisely like this in my research.

I started with sketching and trying to figure out how to make it spin. 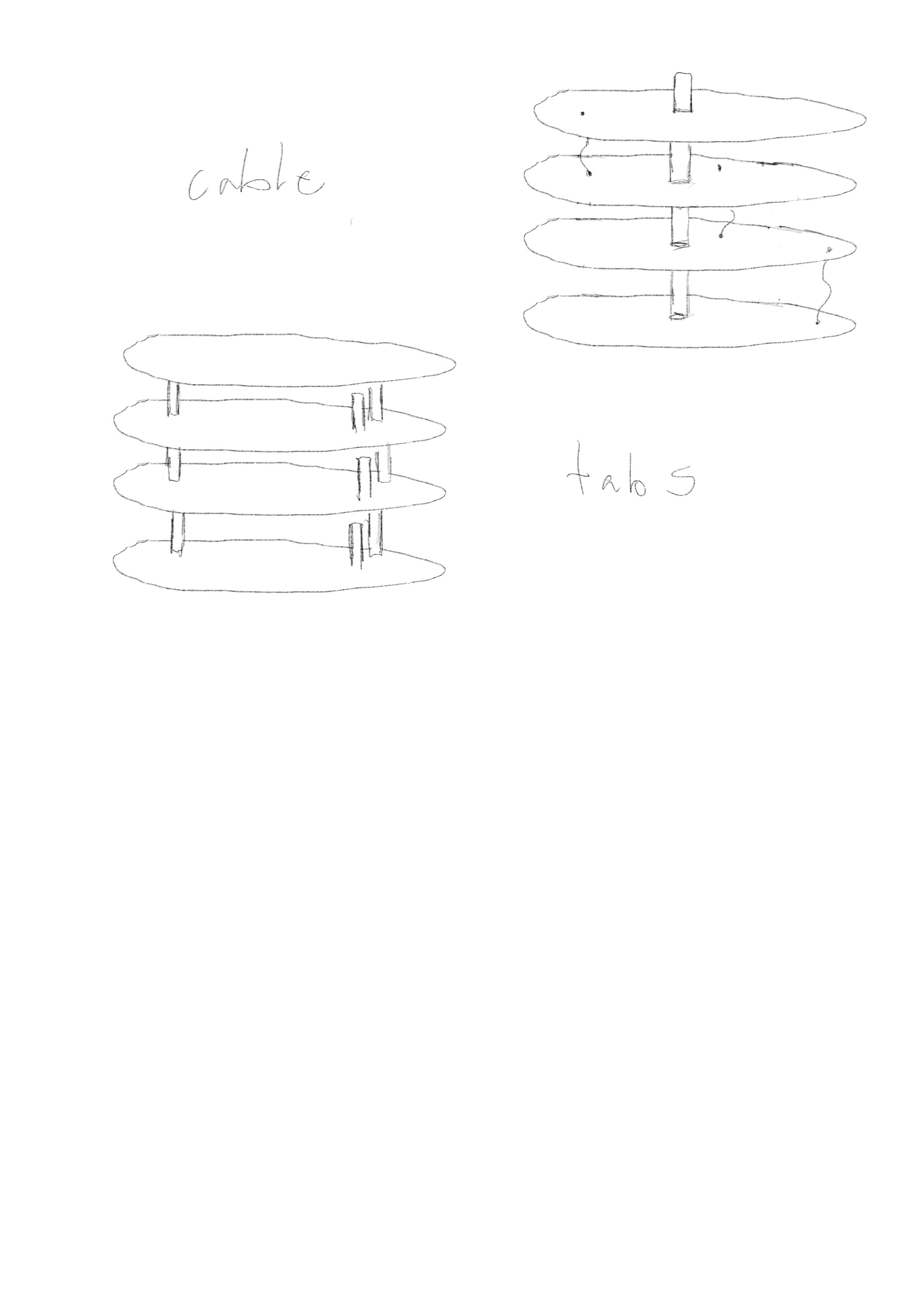 I then figured I needed to get some prototype going ASAP to see if it was possible. 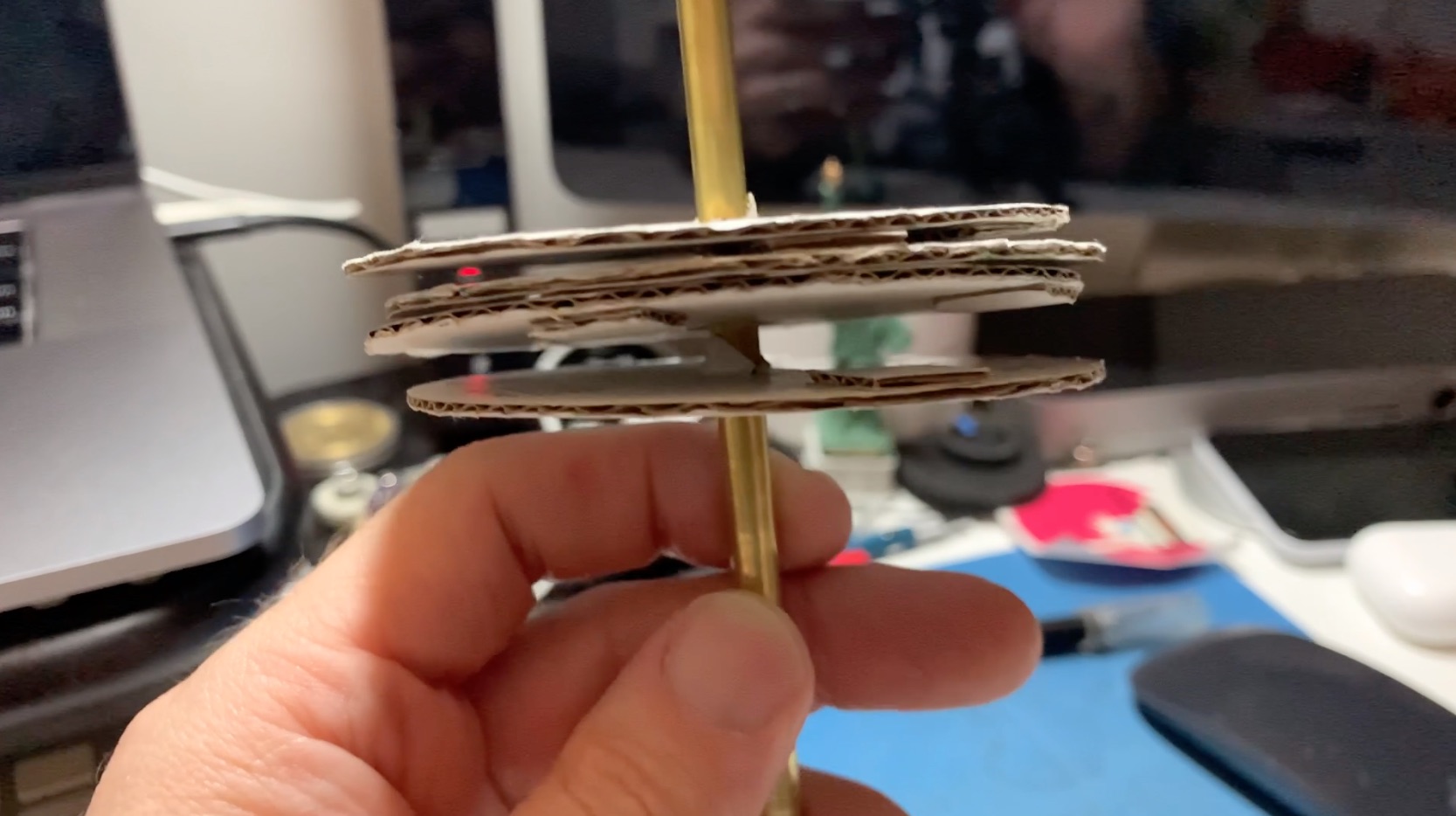 Once I had that, I was relatively confident that a mechanism like this could work. But weight and exactly how to fabricate it were still a question. 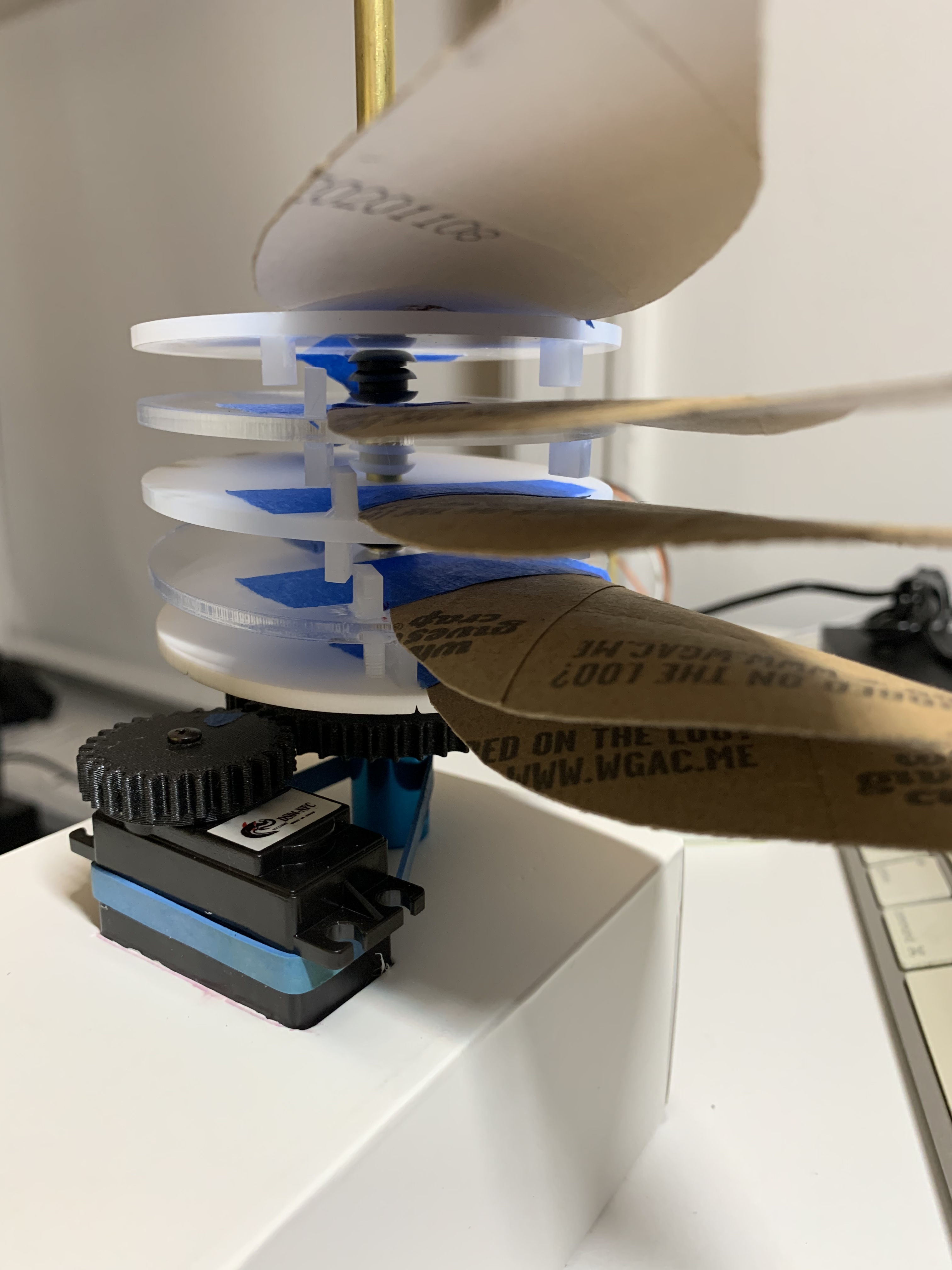 This prototype proved that the mechanism could work, and the support discs and tabs glued together could be a usable fabrication method.

But could I move the weight without breaking glass???

I ended up building this mostly IRL before I got into CAD, but I needed some help figuring out the tab placement and turned to CAD for that help. Then I got sidetracked with building an exploded version and some animations. 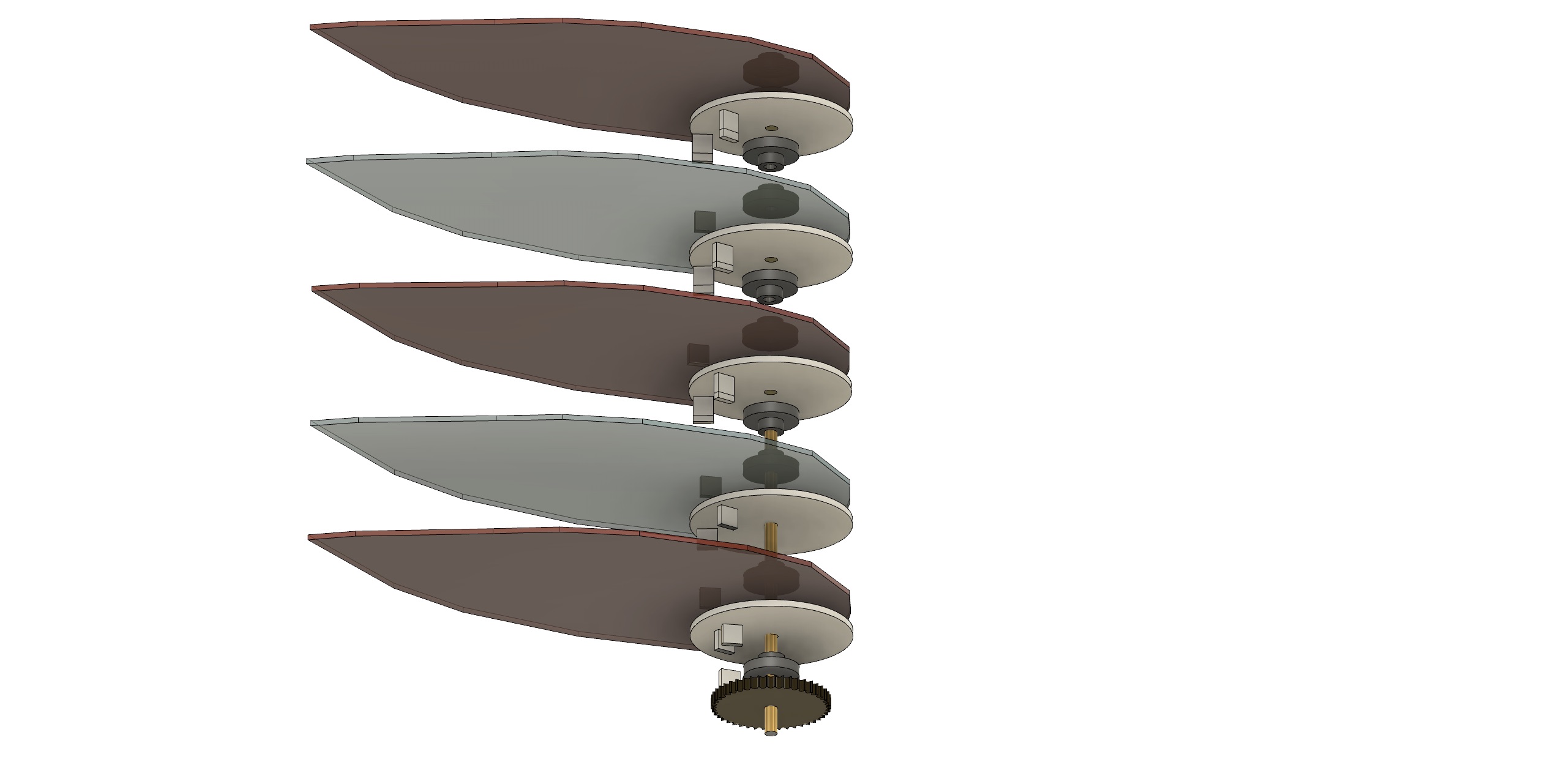 Fabrication
The fabrication, aside from the glass petals, was pretty straightforward. I used 4x4 wood for the base and the bottom of the flower assembly. It allowed for weight and a rigid structure.

I laser cut the support discs, tabs, and the wooden flower pot cover, as well as the leaf for the solar panel. The panel pressure fit into laser cut holes in the leaf. I 3D printed gears modeled in Vectorworks and the servo motor mount downloaded from Thingiverse.

The discs and tabs adhered to the glass petals and various combinations of shaft couplers and rubber grommets were used to space them out to account for the variance of the glass surface.

A brass rod was used as the central shaft for the petals to rotate around. 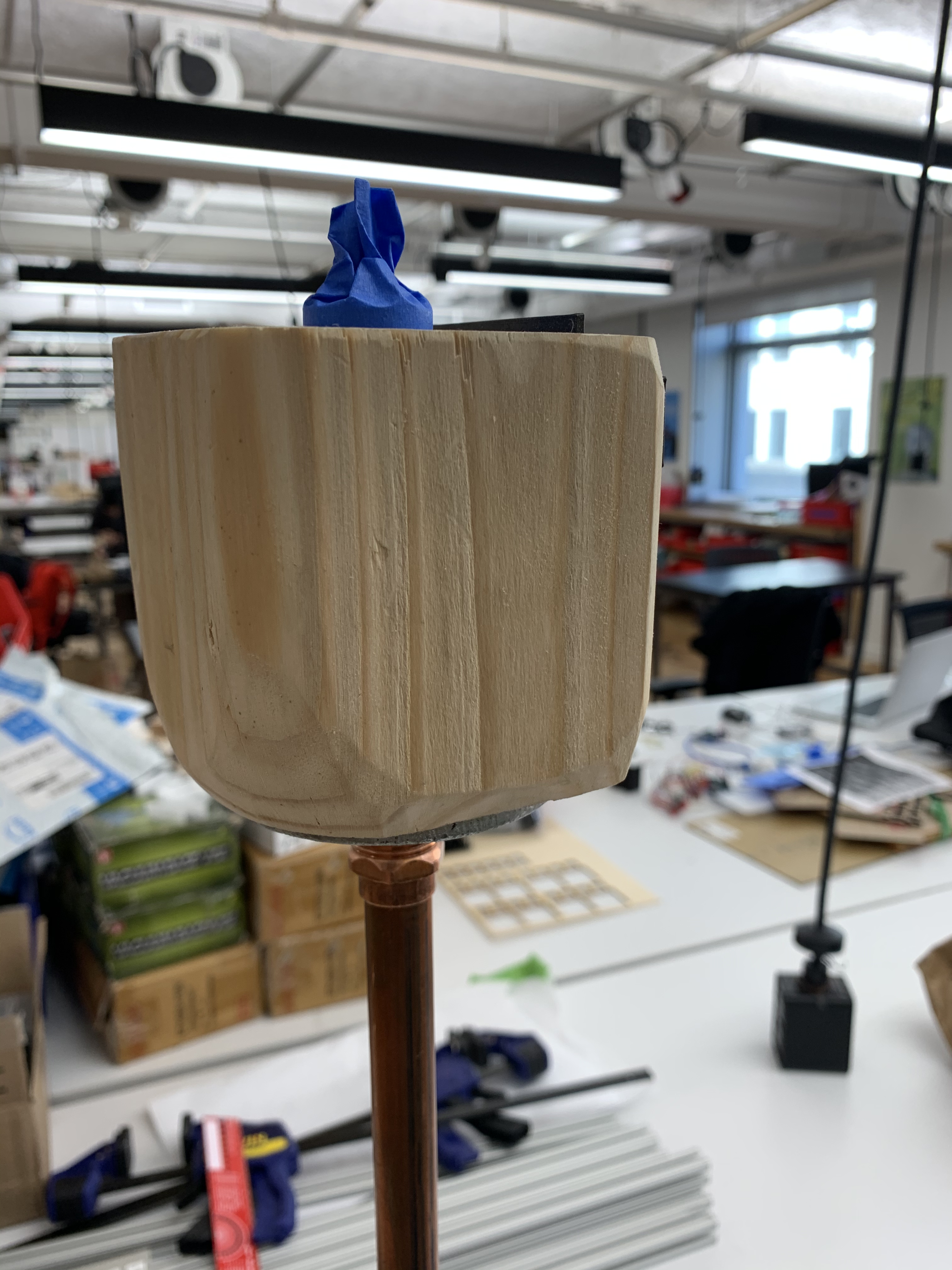 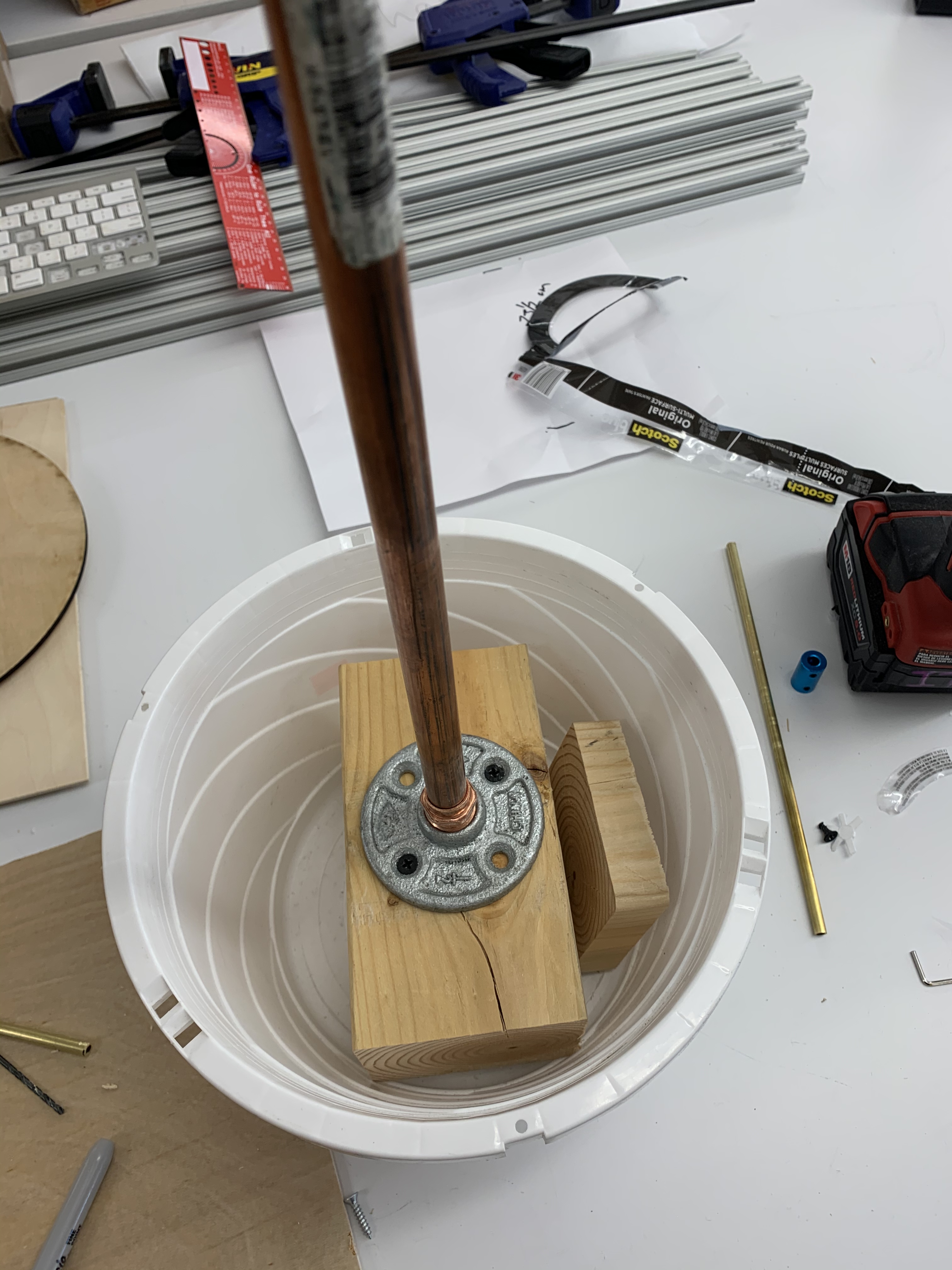 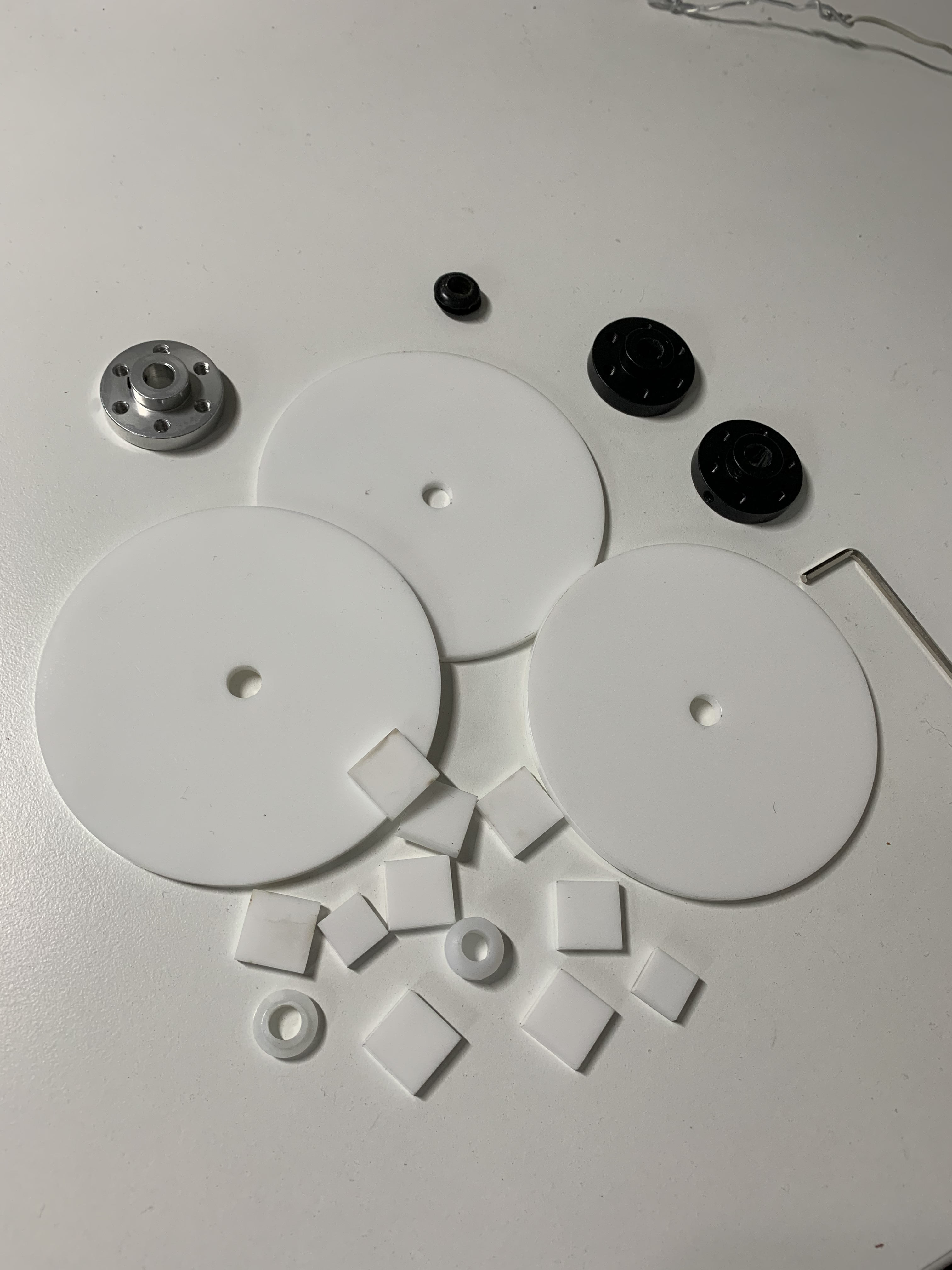 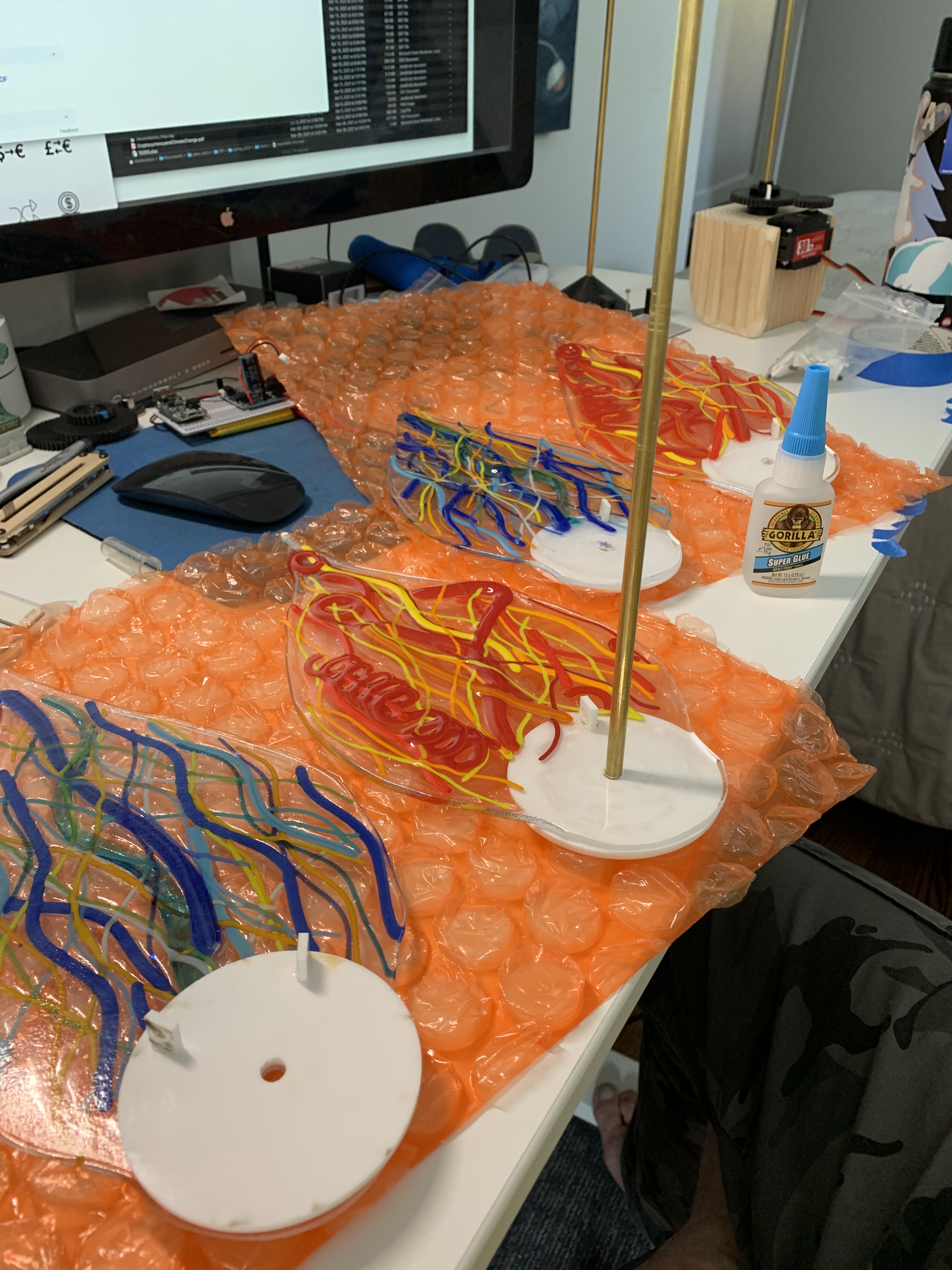 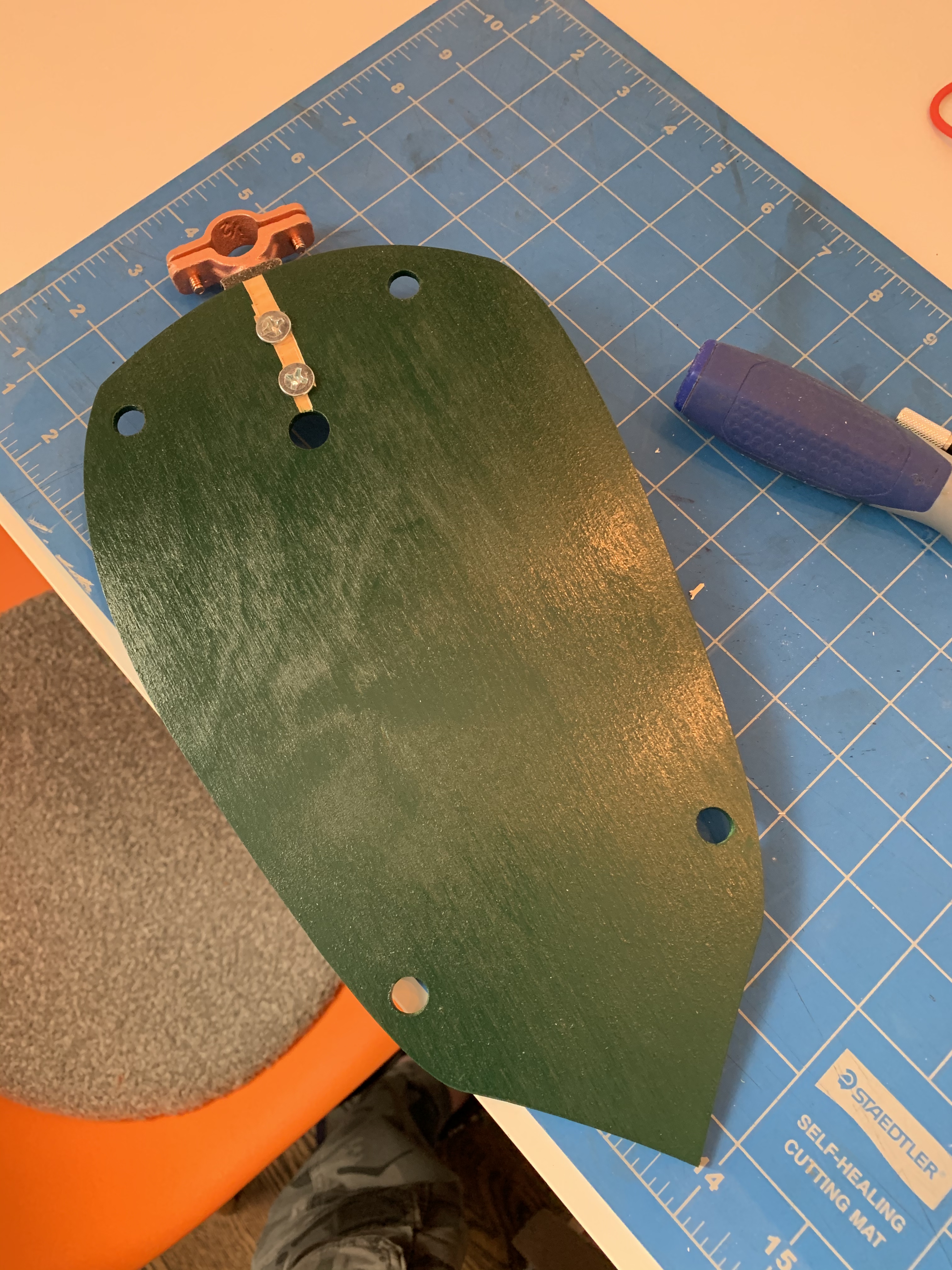 The stem was a copper pipe with all wiring run internally, which was its own challenge.

Solar
Originally wanting to build my own panel with SunPower cells, I ended up moving to a adafruit panel as it simplified the circuit and power requirements.

I still plan to build out the SunPower panel, but the low voltage, high amperage greatly complicated the circuit as well as sourcing parts.

Part of the project was to attempt to make the circuit as efficient as possible. I ended up using the Adafruit Sleepydog library, which, combined with my DFRobot Beetle board, allowed my standby amperage to be as low as 0mA. However, it was a bit higher when the circuit was fully put together.

Per the formulas on the Voltaic site, it will take about 1.37 hours to charge in optimum conditions fully; real-world took closer to 3.

I did learn a valuable lesson, always check the polarity of lipo batteries. I had an old battery that apparently had the JST cable reversed, and I ended up frying my charge controller. A new controller and battery fixed the problem.

Code
Overall the code is relatively simple. Using the 360º servo, I did need to work out the logic for my desired rotation. I basically do a pseudo-PWM and just increment the movement by 1 until I reach my chosen degree. Then send a stop signal.

The other tidbit is the snooze function. I found out the hard way that using the Beetle board, which has no reset button, it’s very easy to get stuck in a deep, deep sleep. I entered sleep mode and was unable to escape and load another sketch. I finally found that there is a reset short, which also proved challenging because my board was already soldered to a proto board. I luckily could snake a wire through a hole and complete the short reset.

Finding that also led me to a better way of just setting a delay initially to allow for loading a program before it starts the sleep sequence.

Code is here on Github

Circuit
The main circuit consists of the Beetle MC, a photo-resistor to check for light, and the servo. The solar circuit has a charge controller, charge booster, panel, and lipo battery. 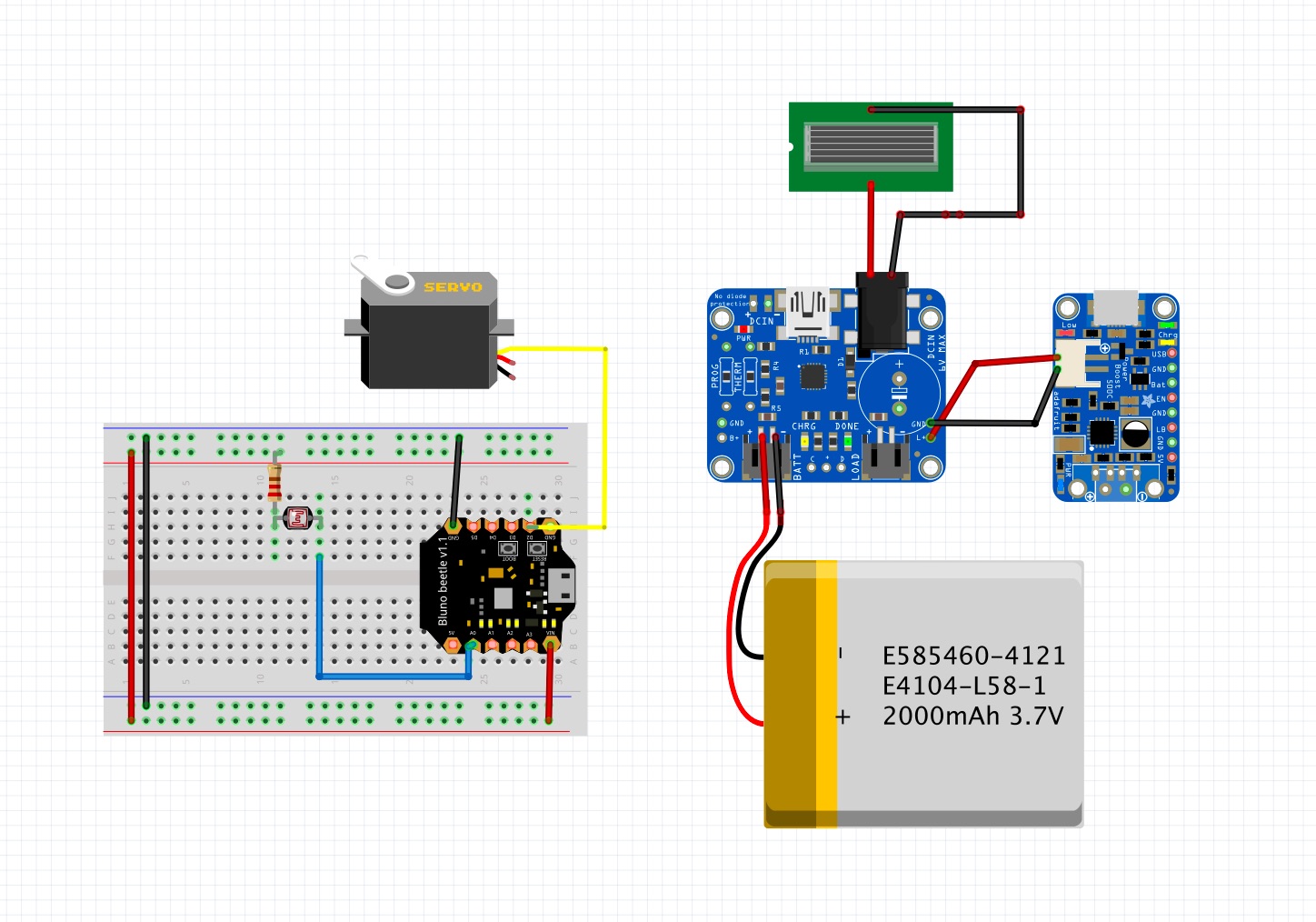 Overall I’m happy with the result. Figuring out the mechanism and having it actually work was the highlight of this project. Ultimately, this is a prototype for additional projects I hope to collaborate on with my mom.